skip to main | skip to sidebar

I finished my “Final” Review. Was mostly uneventful, which is a good thing. In all my reviews till now the last “thank you” slide had funny one-liners such as “Half MT and Half Full”, “MT, but almost Full”, etc and I had gotten slaughtered every single time. After long deliberations with myself, I stuck with “the end.” for the final review. The subtlety went largely unnoticed and I did not get as badly slaughtered. Wonder if it’s a cause - effect relationship. I had, however, contemplated long and hard about putting a picture of a white flag in the last slide, but let it pass. Smart move, I tell myself.

I also got a couple of teeth pulled out, and held back a lucky few for the next time. As if that was not bad enough, I watched Jaane Tu Jaane Na soon after. That hurt.
A week after I have gotten the teeth removed I am still struggling to eat with solid / spicy food – I am reminded of the Ogden Nash poem we had in school –
And this, O Fate, is I think the most vicious circle that thou ever sentest,That Man has to go continually to the dentist to keep his teeth in good conditionwhen the chief reason he wants his teeth in good conditionis so that he won’t have to go to the dentist.

Before all this, I finished my Shadow ASM stint in upcountry Maharashtra. Was based out of Jalgaon. I am beginning to learn that places suffixed with “gaon” are not the nicest of places to be in. But great thing about Jalgaon is that I got to stay in the presidential suite of the Hotel Royal Palace. Operative word – the (both places). The Royal Palace had 2 TVs, 2 fridges, 2 bathrooms, and the icing on the cake – the circular bed. I am sure you have not slept on a circular bed before. It can be rather confusing. 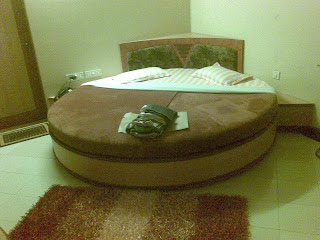 The other place where I have seen a round bed is in Technicolour Kannada Cinema. Random women doing random dances on and around the bed in an inane attempt to please the villain - who would generally be preoccupied with “settling score with hero”, “when to bomb the whole of India using the remote control with red button”,” can my laughter *possibly* reverberate any more?”, etc issues. The Villain would more often than not, be Vajramuni.

In other news, I am heading to Tirupati. Apart from being close so home, it has free haircut. So I am looking forward to that bit. Most people were surprised when I was asked them about what kind of a place Tirupati was. They would shoot back with “what?! You have never been there? !!” . One particularly smart chap also said “See – and you thought you would never visit Tirupati, eh?”. It is purely by chance that I have not visited Tirupati. I have visited almost all the other temples in South India. Especially Mantralaya – so much so that I am sure the temple elephant recognizes me. I always feed him bananas every time I go there.
But there sure was one person who was mighty pleased when I informed him of my location. Mr. Sushanth Tom Daliparthi, ASM, Madurai – the other happening temple town this part of the map, called me up and laughed with all the Tom Bramness acculmalated over the months that it reminded me of villains in technicolour Kannada movies. Again.
Posted by Roofy at 1:08 AM 7 comments: