skip to main | skip to sidebar

Waking up in the morning is not a particularly pleasant thing. Especially on a Saturday morning. At 7 am. Even more so in Venkatadri Express. And add to it the enlightenment slowly settling into your head that the train is going to reach destination at 11.15 am instead of 7.30 am. Your lack of expertise in Telugu gives you a glimmer of hope - maybe they were talking about something and I heard something else, but that is squashed when you see the station name through the dusty glass of the AC 3 tier window "Cuddapah". Damn. Another 4 hours.
The fantasticness of the train journey continues as you cannot sleep any longer in your middle berth. Two kids are pulling your hair as their mother talks to you in Telugu with a requstudu to wakeupdu and sitdowndu so that everyone can sitdownudu. I felt like doing unto her kids what they did unto me. But given their chances of getting back into this train on their return journey with any hair at all, I just let it be. That is the case with most people who travel to Tirupati. They bring their kids all noisy and all in a train and take them back all sulking - at the prospect of their perfectly neat shaven and shining scalps being the butt of many a joke in school the next day.
Since I never sit around in a train journey - I did the next best thing. Stand at the door. Click random photos. Drink tea. 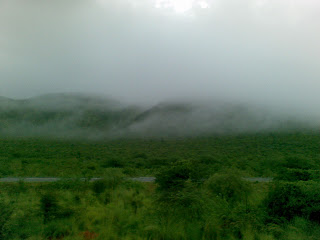 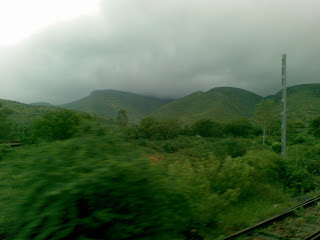 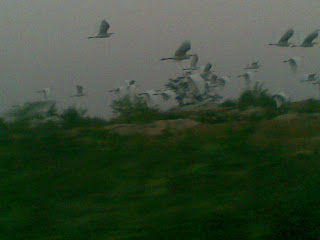 I picked up this habit when I used to take the Coromandel Express while traveling to Jampot. I would spend a considerable amount of time at the door – because of the pretty route - Coastal AP (little did I know then that I would be ASM there once I pass out) and Orissa. These long journeys to XL were also the birth of the (only) B Plan that I ever made in B School.

I would see a lot of people fishing in the fresh water, and it looked like they were doing it for a living. Being trained to think like an MBA, I *knew* that this was a novel idea and could be scaled up profitably if a bright young marketing MBA put my head to it. There are a lot of million dollars waiting to be made in these freshwaters, I thought. The demand could be aggregated across India and we could supply the fish. So like any enterprising senior, I found two enthusiastic juniors (who are now engaged to each other) and threw the idea at them. They weren’t as completely convinced as I was about the idea, but were in it anyway for the fun and the CV value of regular B Plan contests. Thus was formed a team which came up with the idea of "Freshwater fishing in irrigational facilities". Being our smart selves, we titled the project "Blue River Strategies" and felt really proud of the title for about it for fifteen minutes. The rest of the B plan, including the numbers also consumed another fifteen minutes of our time. Not only was this famous idea used for the B Plan contest, it was used for sme of the courses in second year which required us to make B Plans.
Unfortunately, the life span of this New Venture was not as long lasting, in fact it did not even last the time it was made it. When I presented in my EnV (Entrepreneurship and New Ventures) course, the junta laughed. That being the normal reaction to most things I did, I was hardly perturbed. But my little joyride was brought to an abrupt end when the Fin prof who was evaluating this B Plan asked whether we had ignored the cost of processing the fish in terms of canning, refrigeration and what not.

Why – why would fish be processed? I thought – they just catch them, fry them and eat them. I then looked, with a lot of hope, at Sandeep, good friend of mine, who was also in this particular group for consult value he brought with himself. He was more confident about this idea even though he had spent the whole of the previous night reading PG Wodehouse and watching a couple of movies, instead if going through the B Plan. “We’ll crack it maga – the idea itself should give us an A+, let alone anything else” he had said in he corridor a few minutes before the start. And this fair judgment of the idea was the result of a mere glance of the heading. He was that kind of bloke.
Sandeep did his usual bit – he pulled his pant up a couple of times in characteristic style, adjusted his hair, then his glasses – made a joke in Queen’s English in between all this which only he and the prof understood, and at the end looked like he had pulled it off yet again. But the prof then said something on the lines of “Fish are perishable – have you guys considered that?” Actually, we hadn’t. And that’s when it all ended.
We made a B. We should have stuck to aggregating demand of curd rice, we realized.